Belgian startup, epihunter, introduces automated video functionality to their CE-marked seizure detection app - a breakthrough for children and adults with epilepsy, their families and doctors.

“Including video in epileptic seizure detection has the potential to change the way neurologists and epileptologists assess and document seizure frequency and the effect of therapy,” says Dr Sándor Beniczky, Head of Clinical Neurophysiology at the Danish Epilepsy Centre.

It is estimated that 1 in 100 people have epilepsy, and 1 in 3 people with epilepsy continue to experience uncontrollable and unpredictable seizures despite medication. Motor seizures, which manifest as repeated automatic movements and unconsciousness, is what most people think of when they hear the word ‘seizure’.

“Yet, 1 in 7 people with epilepsy, more than 9 million people worldwide, suffer from seizures that do not make them fall to the ground. Instead, during a seizure, their brain appears to be on pause and they will simply stare and react in slow motion. Absence seizures, also known as ‘petits mals’, can last from a few seconds to several minutes”, says Tim Buckinx, epihunter founder and father of a 14-year-old son with absence epilepsy. 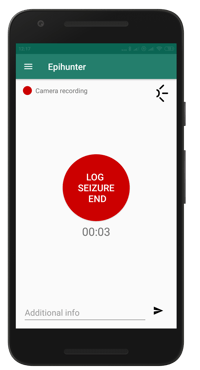 By their very nature, absence seizures can be incredibly difficult to notice and for those affected by absence seizures, this can cause a great deal of miscommunication and frustration in everyday life. In mid-2018 epihunter launched their first solution to signal and log absence seizures in real-time and this has been decreasing the impact of seizures in classrooms, at work, and at home. A complementary app, epihunter Companion, was launched at the end of 2018 to make seizure records available on nominated (e.g. parents’) smartphones, allowing the data to be easily shared during, for example, medical consultations. Today, epihunter also obtained CE marking as a Class I medical device.

Epihunter today launches the ability to automatically video-record absence seizures. In addition, they have built-in loop-recording functionality, adding 30 seconds of recording prior to the actual seizure.

“Video is a cornerstone in diagnosis and therapy optimisation. And pre-ictal [the moments prior to a seizure] video is of utmost interest for the treating physician,” says Dr Alexander Rotenberg, Neurologist at Boston Children’s Hospital and Associate Professor of Neurology at Harvard Medical School.

As Tim explains, “while our first solution focused on making absence seizures visible in real time and making seizure history available, the addition of video takes a great deal of reporting pressure off the shoulders of parents and family. This is part of epihunter’s mission: to make epilepsy matter less at the moments that matter the most, for the person with epilepsy and also for their family.”

*names of parents and children were changed
© 2021 epihunter All rights reserved.