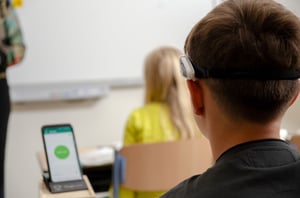 The epihunter solution consists of a smartphone app connecting with a slim and comfortable consumer EEG headset. The core of the product is the AI algorithm to detect absence seizures, and upon detection, seizures are automatically signalled and logged and they can be automatically video-recorded too. Different from convulsive seizures, absence seizures are difficult-to-notice, short and the person is not aware of having them. This makes it especially tough at school or at work, but also at home for family members to notice the seizures.

“The goal of our research grants program is to accelerate the development of new therapies and diagnostic devices so that we can get them to people with epilepsy faster, and in a time frame that matters,” says Sonya Dumanis, PhD senior director of Innovation, Epilepsy Foundation.

“We are encouraged by epihunter’s innovative solution to use Artificial Intelligence (AI) to help those with absence seizures gain better seizure control. Our grant will advance the company’s AI seizure detection algorithm to get it a step closer to those in our epilepsy community.”

Today epihunter is used in Europe where the service can be ordered online. Both children, youngsters and adults with absence or focal impaired awareness seizures are using epihunter and a separate Companion app shares the results with family members and carers.

“The New Therapy grant will play a huge role in the validation of our algorithm and will help us develop algorithms for other seizure types. In the EU and US combined, there are 1.6 million people with absence seizures, and with additional algorithms, we hope to help improve the daily life of all 65 million people with epilepsy worldwide,” explains Dr Dirk Loeckx, principal investigator and CSO at epihunter.

The grant awarded project will involve Boston Children’s Hospital (Boston, US) and the University Hospitals of Leuven (Belgium). It will study both retrospective and prospective EEG data.

“Boston Children’s Hospital’s clinicians and researchers have extensive experience in setting up and running medical device studies, including those involving seizure monitors. We are eager to measure epihunter’s impact on therapy decision making and daily life,” Rotenberg adds.

The $200k grant is one of many recent developments at epihunter.

“After we earlier this year received the CE marking for our software and launched our world-wide first epileptic video recording functionality, this grant will help speed up the commercialization and make epihunter available to families also outside Europe,” says Tim Buckinx, epihunter CEO and father of a son with epilepsy.

- Digital health tech startup based in Hasselt, Belgium
- Epihunter builds digital solutions to help normalise the daily life of people with epilepsy
- Developed epihunter, a solution to signal, video-record and log difficult-to-notice epileptic absence and focal impaired awareness seizures
- Epihunter is available for sale in Europe and consists of a seizure detection app, a companion app, and a slim EEG headband to record brain waves
- The epihunter software is a CE marked Class I medical device
- Epihunter is a 2019 MassChallenge HealthTech finalist
- Epihunter is currently raising funds for further clinical validation and certifications, to create the next impactful features, and to make their products available to more people with epilepsy

The Epilepsy Foundation is leading the fight to END EPILEPSY®. With a network of nearly 50 partners throughout the United States, the Foundation connects people to treatment, support and resources; leads advocacy efforts; funds innovative research and the training of specialists, and educates the public about epilepsy and seizure first aid. For more than five decades, the Epilepsy Foundation has shone a light on epilepsy to promote awareness and understanding, and to advocate for laws that matter to people with epilepsy, while also funding $65 million for epilepsy research and supporting 3,076 epilepsy investigators and specialists in their early careers.

The New Therapy Commercialization Grant is part of the Foundation’s Epilepsy Therapy Project, a research program that seeks to advance innovative ideas in epilepsy, seizure treatment, and care. The Foundation’s Epilepsy Therapy Project has invested approximately $8.9 million in more than 95 different initiatives in the clinical pipeline over the past decade.

*names of parents and children were changed